Canadians For Safe Technology is a not-for-profit, volunteer-based coalition of parents, citizens and experts whose mission is to educate and inform Canadians and their policy makers about the dangers of the exposures to unsafe levels of radiation from technology and to work with all levels of government to create healthier communities for children and families. 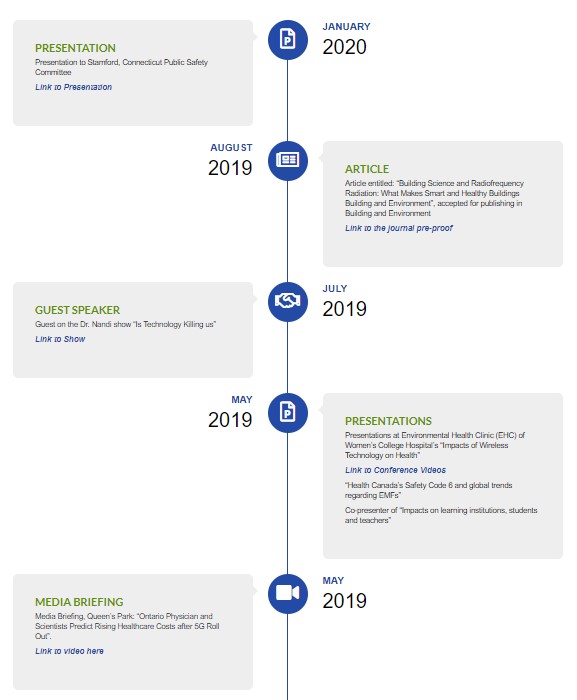 [/block_title][/vc_column][/vc_row][vc_row type=”full_width_background” bg_color=”#e5e5e5″ top_padding=”45″ bottom_padding=”30″ full_width=”stretch_row_content_no_spaces”][vc_column][block_title title=”Get Involved”][/block_title][/vc_column][/vc_row][vc_row type=”full_width_background” bg_color=”#e5e5e5″ top_padding=”0″ bottom_padding=”45″ full_width=”stretch_row_content_no_spaces”][vc_column width=”1/2″][vc_accordion][vc_accordion_tab title=”1. What is wireless radiation?”][vc_column_text]Radiation  emitted  from  wireless  devices  and  cell  towers  is  a  form  of  electro-magnetic radiation   (EMR).   EMR   includes   electric  waves   and   magnetic   waves   as   well   as microwaves.  Wireless  radiation,  also  called  radiofrequency  radiation,  is  part  of  the microwave  radiation  range.  All  wireless  devices  emit  wireless  radiation,  including cordless  and  mobile  phones,  wireless  baby  monitors, televisions,  tablets,  laptops,  and GPS  systems.  They  emit  wireless  radiation  when  they are  turned  on  and  also  when connected  to  a  network  or  cell  tower.  Smart  meters and  Wi-Fi  also  emit  wireless radiation.[/vc_column_text][/vc_accordion_tab][vc_accordion_tab title=”2. Is wireless radiation harmful to humans? “][vc_column_text]This type of radiation has been categorized as a 2B potential carcinogen by the World Health  Organization  (WHO).  Lead  and  DDT  are  in  the same  category.  Several international  panels,  including  the  BioInitiative  Group,  have  concluded  that  wireless radiation  is  not  safe,  and  requires  restrictions  and  improved  guidelines  on  human exposure. The latest information concerning wireless radiation as a possible carcinogen comes  from  Swedish  researchers  in  a  study  published in  the International  Journal  of Oncology. The  study confirms  previous  results  of  an  association  between  mobile  and cordless phone use and malignant brain tumours.

Beyond  an  increased  risk  of  cancer,  wireless  radiation  is  harmful  to  humans  in  many ways.  Some  Canadians  have  noticed  changes  in  their health,  such  as  increasingly severe headaches and pain, fatigue, rashes, memory lapses, and dizziness. Combined, these  symptoms  have  been  characterized  as  “electrohypersensitivity”  (EHS).  People living with EHS find that their symptoms recur when they are in physical proximity to cell towers, Wi-Fi,  smart  meters  and  other  EMR-emitting devices.  People  affected  by  EHS often  must  take  measures  to  distance  themselves  from  any  location  where  EMR  is present. This has consequences including their ability to work and support their families.[/vc_column_text][/vc_accordion_tab][vc_accordion_tab title=”3. How is this radiation regulated in Canada? “][vc_column_text]

Canada’s federal government, through Health Canada and Industry Canada, is responsible for regulating exposure to wireless radiation. Health Canada’s mandate on the issue of human exposure is to conduct research on potential health effects and to develop exposure guidelines. Safety Code 6 (SC6) is Canada’s exposure guideline to radiation from wireless telecommunication devices, including sources such as cell towers, smart meters, portable and cell phones, baby monitors, and Wi-Fi.
Not properly updated since 1979, Health Canada’s SC6 is fundamentally flawed: it does not measure for biological harm in humans, only thermal (heating) effects. It also does not account for children’s developing brains and bodies, which absorb up to ten times the amount of wireless radiation than adults do.
Health Canada’s aim is to set out safety requirements for the installation and use of
devices that run in the frequency range from 3kHz-300 GHz to prevent adverse health effects on Canadians. Safety procedures and installation guidelines outlined in SC6 were designed for and only directly applicable to employees and visitors to federal buildings, although they have been adopted by the provinces, industry and other interested parties, for the general public.

No. Health Canada currently believes that the levels specified in SC6 are below the threshold for any potential danger, despite more and more recent evidence that empirically demonstrates that this is not the case, and that SC6 should be updated to modern standards. This matter is increasingly important because Industry Canada also uses SC6 to regulate radiation emissions from cell towers. Exposure limits in Italy, Switzerland, China and Russia are 100 times more st ringent than those of Canada’s SC6.
In early 2013, Health Canada undertook a scheduled review of SC6. As part of the process to have an independent third party organization review SC6, Health Canada
instructed the Royal Society of Canada (RSC) to convene a panel to review its work.
This flawed review was published April 1, 2014.

This report is biased. In spring 2013, the RSC announced the appointees to the panel that would review Health Canada’s work on SC6. C4ST spoke out against the choice of appointees, as many of them have clear ties to the telecommunications sector and have received research funding from companies in the industry.
Further, the chair of the panel, Dr. Daniel Krewski, who was also the chair of the RSC panel in the 2009 review of SC6, has written numerous articles about his belief that SC6 is acceptable in its current form, and that wireless radiation does not affect Canadians’ health and safety. Information discovered by an investigative reporter was disclosed in the Canadian Medical Association Journal indicating that Industry Canada had paid Krewski’s private company Risk Sciences International $126,000 to provide a risk assessment of SC6 and how to deal with the Canadian public. Dr. Krewski resigned after this information was made public. Since then, two other scientists have resigned from the panel due to “personal and academic commitments.”
Since the report was published, two of the Report’s official peer reviewers have stepped forward to say something is amiss. It has been revealed that the Royal Society concluded that its “survey of the evidence” supports the notion that wireless radiation is safe, only because the panel did not consider the science that shows it is not.
Definitive evidence that cell towers, cell phones, smart meters, Wi-Fi and cordless
phones can cause harm to humans has been swept aside at the highest level of scientific oversight in Canada. The two scientists breaking their silence are eminent
scholars in the fields of human cellular biology and the environmental causes of cancer in our society.

C4ST is disappointed with the results, as well as the overall process, of the RSC’s year-long review of Safety Code 6. This RSC panel did not approach the issue through an objective lens, and ignored the strong evidence indicating that wireless radiation emitting devices and towers should be subject to a much stronger Safety Code 6.
C4ST believes that Canadians deserve safety guidelines that keep up with technology, and is committed to working with all levels of government to protect the health and safety of Canadians. The goal today is to highlight the flaws in the RSC report and to implore Health Minister Ambrose to focus on Health Canada’s commitment to making sure part 2 of the process to update SC6 is more transparent and follows international best practices in evaluating scientific research.