On Tuesday June 9th, 2015 the Standing Committee on Health, whose mandate is to study and report on all matters relating to the mandate, management, and operation of Health Canada, unanimously adopted the final report into their study of Health Canada’s Safety Code 6. During three full days of hearings spread over two months, the ten MP member panel heard from both sides of the issue including leading scientists and doctors from around the world, Health Canada and the Canadian Wireless Telecommunications Association. (Full testimony and recaps can be found further down on this page)

On June 17th, 2015, the Chair of the HESA panel MP Ben Lobb read and tabled the below final 12 HESA recommendations into the House of Commons, requesting that the Government table a comprehensive response to the report. As the current Government goes on summer break on June 19th, 2015, followed by the federal election in October, it will be the new Government that is elected that will be responding to this HESA report.

That the Government of Canada, in collaboration with the health departments of the provinces and territories, examine existing cancer data collection methods to improve the collection of information relating to wireless device use and cancer.

That Statistics Canada consider including questions related to electromagnetic hypersensitivity in the Canadian Community Health Survey.

That the Government of Canada, through the Canadian Institutes of Health Research, consider funding research into electromagnetic hypersensitivity testing, diagnosis and treatment, and its possible impacts on health in the workplace.

That the Canadian Medical Association, the Royal College of Physicians and Surgeons, the College of Family Physicians of Canada and the World Health Organization consider updating their guidelines and continuing education materials regarding the diagnosis and treatment of electromagnetic hypersensitivity to ensure they are based on the latest scientific evidence and reflect the symptoms of affected Canadians.

That the Government of Canada continue to provide reasonable accommodations for environmental sensitivities, including electromagnetic hypersensitivity, as required under the Canadian Human Rights Act.

That Health Canada ensure the openness and transparency of its processes for the review of Safety Code 6, so that all Canadians have an opportunity to be informed about the evidence considered or excluded in such reviews, that outside experts are provided full information when doing independent reviews, and that the scientific rationale for any change is clearly communicated.

That the Government of Canada establish a system for Canadians to report potential adverse reactions to radiofrequency fields.

That an independent scientific body recognized by Health Canada examine whether measures taken and guidelines provided in other countries, such as France and Israel, to limit the exposure of vulnerable populations, including infants, and young children in the school environment, to radiofrequencies should be adopted in Canada.

That the Government of Canada develop an awareness campaign relating to the safe use of wireless technologies, such as cell phones and Wi-Fi, in key environments such as the school and home to ensure that Canadian families and children are reducing risks related to radiofrequency exposure.

That Health Canada conduct a comprehensive review of all existing literature relating to radiofrequency fields and carcinogenicity based on international best practices.

That the Government of Canada, through the Canadian Institutes of Health Research, consider funding research into the link between radiofrequency fields and potential health effects such as cancer, genetic damage, infertility, impairment to development and behaviour, harmful effects to eyes and on the brain, cardiovascular, biological and biochemical effects.

That the Government of Canada and manufacturers consider policy measures regarding the marketing of radiation emitting devices to children under the age of 14, in order to ensure they are aware of the health risks and how they can be avoided. 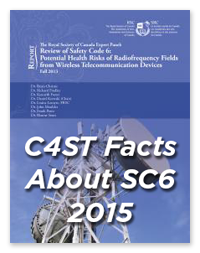 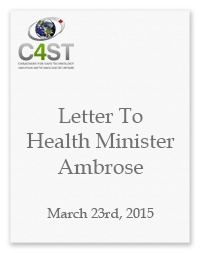