The Saskatchewan government has ordered its power utility SaskPower to remove 105,000 so-called smart meters installed at homes and businesses across the province, following concerns about eight unexplained fires associated with the units.

“The concerns about safety are paramount here,” Boyd told reporters in Regina. “The concerns are significant enough that we believe that any time that families are at risk here in Saskatchewan, actions have to be taken. That’s why we’ve directed SaskPower accordingly.”

The issues with the smart meters in Saskatchewan have prompted the city of Medicine Hat, Alta. to halt installations of its automated electricity meters as well.

Questions about the meters surfaced in July when SaskPower announced it was investigating a handful of cases where newly installed meters malfunctioned. In all cases, the failures only affected the outside of a home and no one was hurt.

SaskPower had put its meter replacement program on hold while it investigated the fires. As of Monday, eight had been reported. 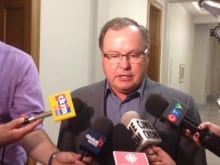 Boyd said it was still not known why the units failed.

Sensus Corporation, the company that supplied the meters, said in a statement to CBC News Wednesday that it has millions of meters operating safely across North America.

“We have no confirmation that the meter is the source [of the fire problems],” the statement said. “We are working with SaskPower to understand what specific events led to those issues and to determine the best course of action. The investigation is still underway.”

Sensus is a multinational company servicing the utility industry with headquarters in the U.S. and operations around the world.

Cost of swap in the millions

According to officials, it will take about six to nine months to swap out the meters already installed. That is expected to cost about $90 per customer — $45 for a different meter and $45 for the work. That works out to around $9.5 million for the entire province. SaskPower also has a cache of more than 100,000 new devices in storage that will not be used. 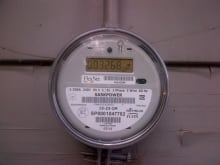 Later on Wednesday, SaskPower indicated it expected the overall cost of the recall could reach $15 million. On Thursday, officials added that the cost already spent on the smart meter program was $37 million.

It was not immediately clear who would cover the costs associated with the swap. Boyd said he hoped to recoup the money from the company that supplied the meters.

The minister also said SaskPower will conduct an internal review to examine how the company came to select Sensus meters for its system-wide replacement program.

“Certainly, the initial goals [of the replacement program] were right,” Boyd said. “[To] provide a better meter, a better understanding of power usage of individual homes.”

Boyd did not rule out the possibility of SaskPower using smart meters again some time in the future, but said their reintroduction would have to be carefully evaluated.

The smart meters, which are manufactured by Sensus Corporation, allow SaskPower to bill customers for the power they use each month rather than relying on estimates between meter readings. The utility introduced the replacement program in October 2013.

“Be assured that there are no safety issues with Sensus electric meters that support today’s decision by the provincial overnment of Saskatchewan.

Safety is our number one priority, and all Sensus meters are subject to rigorous testing and meet or exceed all industry safety standards.

We have no confirmation that the meter is the source. We are working with SaskPower to understand what specific events led to those issues and to determine the best course of action. The investigation is still underway.

Sensus underscores the critical importance of careful meter installation procedures, including the examination of meter boxes and wiring at installation, training of meter installers and the need to have rapid remedial action when field problems are observed.

There are approximately 10 million Sensus meters in North America operating safely and reliably.”

No changes for some Saskatoon residents

The government’s move applies to customers of SaskPower throughout the province, but does not apply to parts of Saskatoon that receive service from that city’s power and light utility. According to Saskatoon officials, their meter replacement program, which uses a different supplier, has not had any problems.

“We have not heard any reports of problems with the Elster brand meters,” Kevin Hudson, a Saskatoon city official, said in a statement Wednesday.

Saskatoon has about 60,000 customers on its system and said half of them have new meters.

SaskPower had been planning to replace a total of 500,000 meters.

Among the features of the new meters was an ability to transmit power usage data through a radio frequency, making it unnecessary for a meter reader to enter a home. That feature had not been implemented for the new meters already installed but was part of the overall plan for the new technology.