In June 2015 the Conservatives, Liberals, and NDP on the Parliamentary Health Committee (HESA) unanimously voted to educate and protect Canadians from the growing concern around wireless radiation.

We are asking all Members of Parliament to agree to support efforts to work with Health Canada and other appropriate agencies and organizations to: 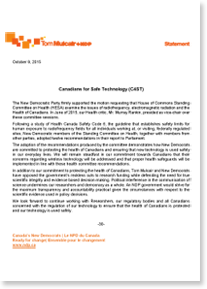 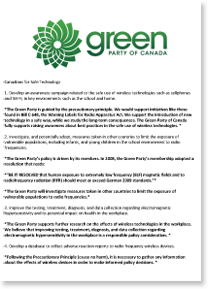 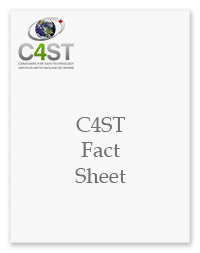 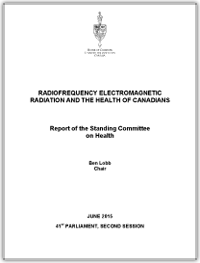 In compliance with section 550 of the Canada Elections Act, your pre election commitment to this issue ended on polling day and places no obligation on you to follow a particular course of action either now or in the future. Nothing in this MPs Who Care commitment is intended to limit, nor will it limit, your freedom of action in Parliament  and Canadians For Safe Technology will not rely on it to attempt to achieve such a result. This is consistent with some other similar federal campaigns such as the FCM Hometown Proud one found at http://hometownproud.fcm.ca/commitment 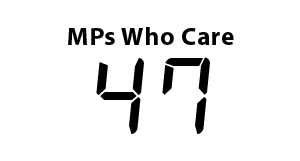 MPs That Care About Canadians Health

Health Canada ignores the scientific research; its review is subject to bias and incorrect conclusions

Health Canada’s statements to the committee conflict with statements made under oath in Quebec Superior Court on Feb 13th, 2013

Health Canada ignores the 2010 Health Committee recommendation to “ensure that it has a process in place to receive and respond to reports of adverse reactions to electromagnetic radiation emitting devices.”

Health Canada resists the request to have a database that physicians may be asked to look at any kind of possible cause and effect on new cancers among people?

Scientific expert calls for a special category for pregnant women

Justification for the precautionary principle

Evidence of links to brain cancer

Evidence of links to breast cancer

Evidence that children are more at risk

Canadians feel deceived both by the product manufacturers and the government

Evidence of damage to sperm

Evidence for recognition of, and treatment for, electrosensitivity

Speakers Handouts to The HESA Committee

March 26th, 2015 “It was agreed, — That, notwithstanding the motions adopted Tuesday, February 24, 2015, the Committee hear witnesses concerning Safety Code 6 on Tuesday, April 21, and consider a draft report of its study of scopes of practice on Thursday, April 23, 2015.”

April 30th, 2015 It was agreed, That the Standing Committee on Health direct Health Canada to provide detailed information in the form of a full scientific monograph on the reasons for acceptance or rejection of 140 studies on EMR submitted by Canadians for Safe Technologies with regards to Safety Code 6.

June 9th, 2015 The HESA Committee agreed on and finalized the draft report of it’s final recommendations.

June 17th, 2015 Chair of the HESA Committee MP Ben Lobb read and tabled the recommendations into the House of Commons.