Did Cellraid Do Volkswagen to the Telecom Industry?

Did a small Finnish company, CELLRAID, Ltd, do ‘volkswagen’ to the telecom industry by showing lack of compliance? In this story, for the first time, are shown measurements results indicating that placing a cell phone in a pocket might cause radiation exposures higher than permitted by the current safety standards.

There are very stringent exhaust limits in USA. Volkswagen cars did not meet them. So, software was added to Volkswagen cars to “help” them be “compliant” with the US EPA requirements. Discrepancy between what is doable in lab setting and what is not so easily doable in real life led Volkswagen to do what it did.

There are safety limits for radiation emission from cell phones. In cell phones used in real life and stored mostly in pockets, these safety limits would be difficult to meet. So, when the standard laboratory tests were developed for measuring radiation emissions from cell phones to assess their compliance with safety limits, a “loophole” was “somehow” introduced to the laboratory tests permitting measurements at a distance from the surface of the test dummy (= at a distance from the users body). The difference between Volkswagen software and cell phone testing loophole is that the software was illegal whereas the “loophole” is legal.

This distance of 1 – 2.5cm in laboratory tests permits that all phones are able to meet safety limits. But, at least some of these cell phones, do not meet safety limits in real use conditions, when users keep them in pocket and, for smart phones, these are simultaneously connected to internet and carry on data traffic.

How many of the cell phone models would not meet the safety limits when measured at distances well smaller than the 1cm, mimicking phone kept in the pocket, nobody knows, because tests done by manufacturers are always performed and reported for the radiation emissions at a distance of 1 – 2.5cm away from the body.

This means that many of us, cell phone users, keep in pockets phones that do not comply with the current safety limits.

Manufacturers seem to be aware of the problem caused by keeping the phone too close to the user’s body. They warn that keeping cell phone closer to the body than the distance specified in cell phone booklet may cause that radiation absorbed by the body is not in compliance with the current safety guidelines.

Booklet supplied by Apple for iPhone states [emphasis by DL]:

“…“SAR measurement may exceed the FCC exposure guidelines for body-worn operation if positioned less than 15 mm (5/8 inch) from the body (e.g. when carrying iPhone in your pocket). For optimal mobile device performance and to be sure that human exposure to RF energy does not exceed the FCC, IC, and European Union guidelines, always follow these instructions and precautions: When on a call using the built-in audio receiver in iPhone, hold iPhone with the dock connector pointed down toward your shoulder to increase separation from the antenna. When using iPhone near your body for voice calls or for wireless data transmission over a cellular network, keep iPhone at least 15 mm (5/8 inch) away from the body, and only use carrying cases, belt clips, or holders that do not have metal parts and that maintain at least 15 mm (5/8 inch) separation between iPhone and the body.”

Other manufacturers also provide a distance warning as seen in few examples given below [emphasis added by DL]:

“To comply with FCC RF exposure requirements, a minimum separation distance of 0.6 inches (1.5 cm) must be maintained between the user’s body and the back of the phone.”

“For body-worn operation, this phone has been tested and meets FCC RF exposure guidelines when used with an accessory that contains no metal and that positions the handset a minimum of 1.5 cm from the body.”

But there is more… as seen from the example below, some manufacturers say they did not test radiation emission/absorption at distances closer to the body than the 1 – 2.5cm mentioned in booklets.

Excerpt from the booklet for LG Nexus 5 phone [emphasis by DL]:

Finnish company CELLRAID commissioned from a specialized testing laboratory, measurements of SAR of cell phones at a distance from 0 to 5cm from the test dummy (= user’s body). The measurements were performed in state of the art SAR laboratory using certified and publicly known and widely used measurement equipment (DASY4). The same lab routinely performs compliance tests of cell phones for telecom clients. The lab is a former NOKIA lab in Oulu, Finland, that tested NOKIA phones for compliance with safety limits (http://www.grant4com.fi/service_1.html). Measurements obtained by CELLRAID indicate that some cell phones when kept in pockets do not comply with the current safety limits.

Table and graphs below show a few examples of SAR values for two Samsung and one Sony phones. SAR is shown for conditions when the averaging is over the 1gram of tissue, as per safety guidelines of the IEEE in USA.

What is not shown in the table, but what was shown to me, is that when averaging is done over the 10g of tissue, the SAR at distance of 0cm is still above the permitted safety limit; SAR was 3.04 (averaging over 10g) and 6.00 (averaging over 1g). 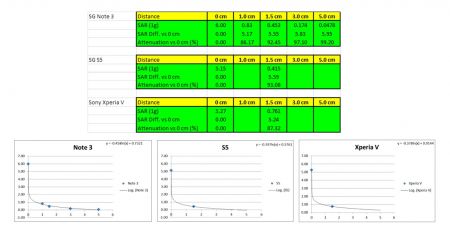 This means, to me, that every time the user puts cell phone in a pocket, this cell phone emissions absorbed by the body might NOT COMPLY with the tested and approved safety standard. The testing protocol does not mimic the real life conditions.

There are up to 7 billion users of cell phones worldwide. How many of the users, by keeping phones in pockets, are exposed to radiation levels that are not in compliance with the safety limits? We do not know.

According to the cell phone manufacturers, the network operators and the safety standards setting agencies, all phones are safe for unlimited use by anyone, irrespective of their age or health status.

This, however, might be yet another claim that misleads users.

Epidemiological case-control studies (INTERPHONE, Hardell group, CERENAT) have indicated, though did not prove, that persons using cell phone for 30 minutes per day for 10 years period have an increased risk of developing brain cancer – glioma. Participants of these studies used cell phones they purchased in shops. Phones that were certified by the laboratory tests to be safe for unlimited use by anyone. Yet, avid use of these safe phones led to an increased risk of developing brain cancer. This means that the current safety limits are insufficient to protect health of the users.

What is more, many users keep phones in pockets and irradiate other than head parts of the body too, and to radiation levels that are not in compliance with the current safety limits. We do not know at all what will be the consequences of the prolonged exposures of various parts of the human body to radiation levels that do not comply with the current safety limits.

Telecom should be required to produce results of radiation compliance tests performed in real-life conditions, when the phone is very close (e.g. 0.1 cm) to users body.

Did CELLRAID do ‘volkswagen’ to the telecom industry by showing lack of compliance with safety limits? 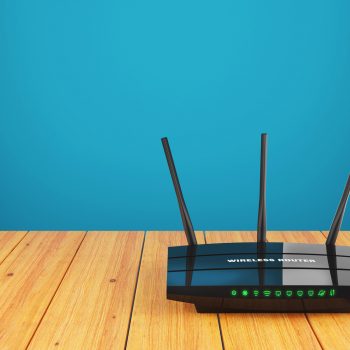